Prof C V Vishveshwara was the founder-director of JNP. He served as vice-chairman of Bangalore Association for Science Education (BASE), the autonomous Body that administers JNP, from the time of its formation in 1992 up to the time he passed away in January 2017

Provided guidance in producing all planetarium shows until he passed away in 2017.

Introduced a distinct style to Planetarium Programme Production such as : use of artwork, cartoons and      anecdotes and mythological stories drawn from different cultures and so on.

Introduced Science Watch, an audio-visual programme to inform the latest in developments in science and      technology to the public. 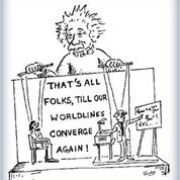 What sets JNP apart is a set of educational programmes offered by non-formal methods to students at various levels, leading to a career in science and research, in particular. These were initiated by Prof Vishveshwara in 1992 and have continuously progressed and made a mark in science academics.

Foundation for a three-year Research Education Advancement Programme (REAP) conducted in collaboration      with IISc, RRI, NCBS and IIA - 2000 (ICTS joined the group in 2016)

Prof. Vishveswara, always called CVV or Vishu by people known to him, passed away on january 16, 2017

'Mondays and Second Tuesday are holidays'